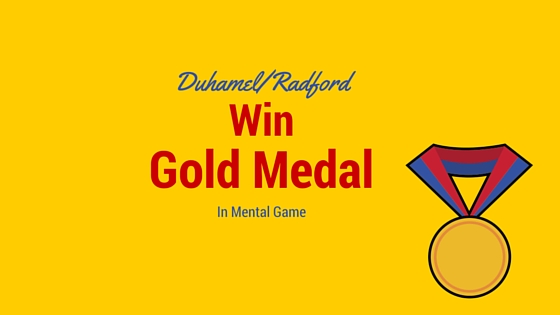 Did you watch the epic back-to-back performances of Meagan Duhamel and Eric Radford at the World Championships this weekend? It was exciting to witness them win a second World title and it was even more incredible to watch them overcome the roller coaster season they experienced and end up on top.

It is not like they weren’t physically prepared to perform this strongly at every competition they entered this season….so what was holding them back?

The MIND is a muscle that, like the body, requires consistent training and attention but is often underestimated and poorly trained.

When you listened to Meagan and Eric’s interviews after the programs they continuously eluded to the STRENGTH OF THEIR MENTAL GAME.

After the short program they said… “we were nervous but centered…felt butterflies but in our gut we were confident…it was not a question, we were going to do it!”

Meagan mentioned that they were sick of finishing programs feeling disappointed. She is a skater who is often referred to as tenacious and determined. PJ Kwong said that she put her money on the couple winning for this exact reason.  But….

it takes more than just sheer willpower to do it.  It takes hours and hours of training the mind to eliminate distractions and stay fully focused in the performance, to control the stress and not allow it to control you, and to bring awareness to the negative self-talk when it arises and reframe it.

After the long program they said…. “we were aggressively focused….trusted our bodies to do the job….let go, were in the moment and created magic!”

The focus was most noticeable on Meagan’s face, as she controlled her emotions while the couple completed each jump, throw and twist flawlessly. It was not until after the final element that she allowed herself to let go and express the incredible joy of knowing that they did it!

Meagan and Eric are the perfect example of athletes who focus on training themselves “holistically” (body, mind, and spirit). Their performance at the World Championships was an inspired example of the Magic that you can create on the ice when you TRAIN YOUR MIND AS EFFICIENTLY AS YOUR BODY!